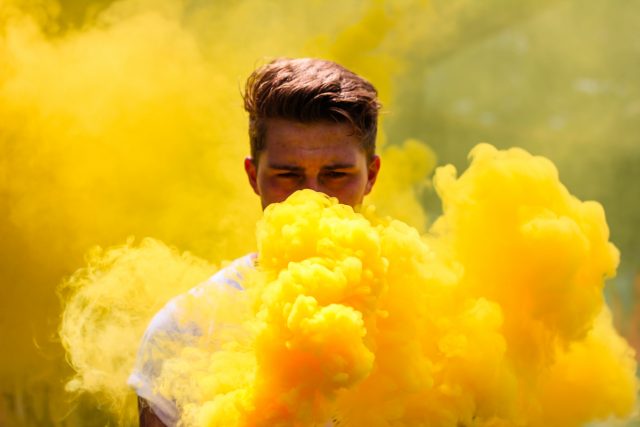 I’m going to describe a style of meditation and I’m going to ask to you defer judgement. It might sound a little out there. Maybe it’s pure nonsense. But until we reach the end and you have all the facts, hold back your scoffs.

All right, on with the kookiness.

Many meditation practices involve focusing on a particular colour. The seven chakras in Hinduism, for example, align with the colours of the rainbow. Taoism has five colours – red, green, white, gold, purple – corresponding to five qualities of the world, our bodies and our minds.

Think on these colours, these practices say. Draw them into your being. Let them enhance you in fascinating ways.

If you’re a sceptical individual who likes meditation only because science has given it a stamp of approval, that might be a little too much to swallow.

You already know the colour blue has a profound effect on the brain. I hope you have blue blocking apps on your computers and phones – otherwise watching the bright, daytime sky while it’s dark out might send your body clock into a spin.

And red influences the brain. It scares the peanuts out of the monkeys in us. When the sky was red – that is, as sunset fades into darkness – our ancestors were at their most vulnerable. That’s why it’s hard to relax in a red room.

So if blue and red change our bodies and brains, what about the other colours?

Feel free to try it and let me know how you go.

Maybe it’ll work because, on a genetic level, we respond to colours.

Maybe it’ll work because you think it should. Don’t worry, there’s no such thing as placebo meditation. If you think it’s working, it is.

Maybe it won’t do anything more than your normal session. Since all sessions are good sessions, that’s not a problem.

Either way, you won’t find this technique in my book. I only included stuff I know works.

And what an interesting list that turned out to be, which includes torture, bullying and triggering psychotic episodes.

But not much about colours.

You can get it here:

Photo by
Christian Sterk on Unsplash

← I don’t know whether this will help you sleep
Worried about getting stuck in trance? Here’s how you get out of it →